Comments about common threads This has been personal, powerful and somewhat painful. I can’t believe I was so brave.

----Maureen Van Camp (participant in common threads) This is an incredibly powerful exhibit, and art of the highest caliber. Your exhibit moved me greatly. It speaks in a quiet, clear inescapable voice. Do you have plans to expand the exhibit and tour with it? If not you should We as a nation need to face and acknowledge breast cancer. Your vision accomplishes the task well! Too well.

---John Weir My mother no doubt would refuse to see this show-2 years after a mastectomy- but it was wonderful for me. ---Unknown Recently I’ve asked, “Why me?” but it hasn’t been about my cancer experience. It has been about the honor to pose and tell our story. It is flattering (no “flat” pun intended to be among such inspiring, strong women. ----Dee Wanger (participant in common threads) I look good big.

---Dacie Wanger (participant in common threads and daughter of Dee Wanger) With tears in my eyes my friend told me about this exhibit. I knew I had to visit it also. ------Unknown I am absolutely blown away. Cancer is something happening all around but if someone has never had to deal with it on a first hand basis it is far away. Your work brought me close to these people. ------Cameron Only O’Dell hits the target: Often Art that tries to make a statement on illness becomes more self-indulgence than self-expression, but O’Dell’s Common Threads carries a real impact on the topic of breast cancer: Her huge embroidered velvet “frames” have a strong emotional center. No bathos, just connection.

Cynthia O’Dell’s “common threads” is an arduous and conceptually well aimed shot from a double-barreled sensibility. It concludes in work to which she brings several skills, keen intelligence and flawless competence.

-Mark Meeker, Internist and son of Lovey Meeker the woman who’s’ battle with breast cancer inspired the exhibit. I am filled with admiration and awe for this poignant presentation honoring the struggles and tribulations of these women who sure didn’t choose to become heroes, but they are heroines.

------Unknown Your exhibit is beautiful (though the subject be ugly) and it honors women and the human spirit. To survive and thrive in spite of because of? adversity, thank you

---Sharon Colo, Nurse Practitioner ...the quilts suggest an alternative concept of beauty, an evocative vision that has been forged out of devastating truama, survival and regaining the self.

Two long scars transverse the upper torso like lines on a map pointing to the location of the assualt, stopping where the breast once was. Her look is defiant, her hair is cropped short, and a heavy cross on a thick chain loops around her neck and falls across her heart like armor. The “effect is that of Venus de Milo” combined with the persona of Joan of Arc or an Amazon queen. It is almost though through physical attrition, Hjelmstad has become a locus of physical power and beauty. 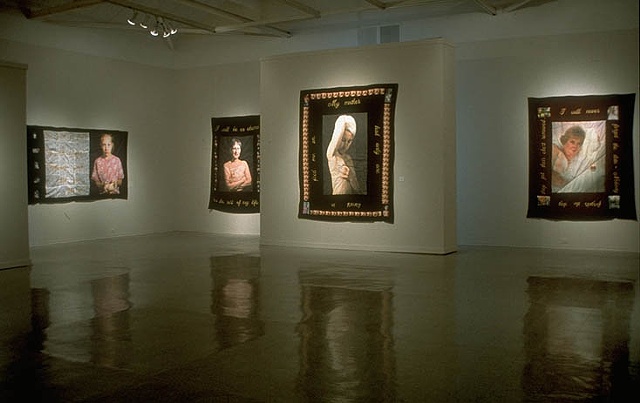 Installation View of common threads
next >